Societies that enter on the path of ‘modern economic growth’ undergo profound transformations. Although most of the changes that accompany this process favour the achievement of higher living standards in the long run, it can also generate some social tensions, especially during the first stages. One of the outcomes associated with growing incomes is the increase in inequality, as stated by Simon Kuznets in his classical work, where he argues that the forces unbounded by economic growth and structural change could initially lead to an upswing of income disparities. Only in more advanced stages of the development process, this trend would be reversed, thus creating the conditions for a more equal distribution of income. Yet, the existence of a U-inverted shape relationship between economic growth and inequality still remains an open debate. While some research provides evidence in favour of the Kuznets’ curve, other work finds conflicting results, so this issue is far from being settled. An important drawback of these studies is that they are mainly focused on the period after World War II due to data availability. However, economic historians have recently made significant efforts to achieve a better understanding of the long-term evolution of inequality.
Following their lead, our article analyses the evolution of inequality and poverty in Spanish regions between 1860 and 1930. This study presents a series of advantages compared to the existing literature. First, the period of analysis corresponds to the early stages of economic growth, which is the centre of Kuznets’ theory. Second, distributional policies were almost non-existing at that time, thus allowing us to focus on the role of economic forces. Third, most international studies employ country-level information, so regional differences are overlooked. This is particularly important in the case of Spain, a country that hides sharp regional disparities, especially in the timing and intensity of industrialisation. Lastly, by focusing on just one country, we reduce the problems that different legal and political regimes impose in cross-country comparisons. Our data also come from the same statistical agencies and thus avoids problems of comparability between different economies, especially acute when comparing data originated in developed and developing countries, or the troublesome conversions of incomes across countries using the purchasing power parity.
In the absence of household surveys or social tables, our inequality measure for each Spanish province is the Williamson Index (WI), an indirect indicator of inequality defined as the ratio between the average income per worker and the wage of unskilled workers. The WI thus compares the bottom of the distribution to the average income. The figure below plots each province’s WI against their level of real income per capita in 1860, 1900 and 1930. Economic growth does not appear to be beneficial for inequality, at least during the early stages of economic growth: the Williamson index increased as incomes grew, a relationship which weakened over time as the Spanish economy developed. 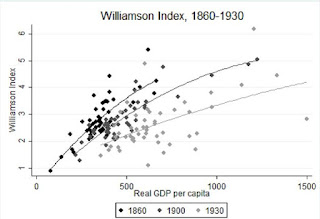 To better assess the distinctive impact of growing incomes on inequality levels, we estimate the determinants of inequality using a panel data set (1860, 1900, 1910, 1920 and 1930) that includes other potential factors influencing this process. The results seem to confirm the presence of the Kuznets curve. However, although growing incomes did not directly contribute to reducing inequality, at least during the early stages of modern economic growth, other processes associated with economic growth significantly improved the situation of the bottom part of the population. In this sense, the population shift from rural areas to urban and industrial centres, the demographic transition and the spread of literacy, among other factors, all partly counterbalanced the initial negative impact of economic growth and helped building a more equal society.
Focusing now on the link with poverty, the literature usually agrees that economic growth is pro-poor. However, recent research promoted by the World Bank stresses that, although growing incomes usually translate into poverty reduction, that relationship is mediated by the presence of inequality. Hence, this strand of literature recognises the importance of both growth and distribution in determining poverty levels. Once again, the links between economic growth, inequality and poverty reduction remain subject to an open debate. Although the lack of information on commodity prices prevents us from being able to compute a subsistence basket for each Spanish province, following Milanovic, Lindert and Williamson (2011), we construct a poverty ratio that compares the unskilled wage to a subsistence wage computed in reference to a fixed subsistence line of 300 $PPP per capita at 1990 prices. Our indicator assesses how far the subsistence wage stands from the earnings of the bottom part of the population. If we plot our poverty measure for each province against the level of real income in 1860, 1900 and 1930, we find that higher incomes per capita were clearly related to lower poverty levels, thus depicting a more positive image of economic development than in the case of inequality. This positive association however almost vanishes as the country developed. 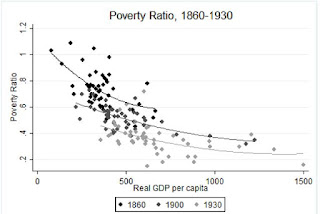 We then carry out a more systematic analysis of the relationship of economic growth and inequality with poverty levels, considering also other variables that might have a direct link with poverty levels. Economic development seems to have opened up new opportunities to wider layers of the population and reduced the poverty ratio, although this positive relationship weakened as incomes per capita grew. Our results also show that inequality and poverty went clearly hand in hand.
To sum up, this article provides two main contributions. We offer new evidence of the evolution of inequality and poverty in Spanish provinces between 1860 and 1930, a period which usually lacks information on these issues and has thus impeded to follow their evolution, as well as a proper assessment of the relationship between these variables and economic development. In this regard, this paper also attempts to assess the causes behind the evolution of these indicators. While growing incomes appear to have fostered inequality (although at a decreasing rate), other processes associated with economic development, such as the rural exodus to urban and industrial centres, the demographic transition and the spread of literacy helped improving the living standards of the lower classes. In addition, the analysis also shows that reducing inequality also contributed to the reduction of poverty levels, so a combination of growth and distribution policies would be doubly beneficial for reducing poverty. Interestingly, the other processes associated with economic growth mentioned above also helped reducing poverty via their effect on inequality. Therefore, the potential of economic growth to improve the lot of the bottom part of the population becomes conditional on its ability to expand the opportunities available to increasingly wider segments of the population.
This blog post was written by Julio Martínez-Galarraga and Francisco J. Beltrán Tapia.
The working paper is downloadable here:
http://www.ehes.org/EHES_78.pdf