The conference was inaugurated with a keynote speak by Robert C. Allen who talked insightfully about absolute poverty measures. Criticizing the common poverty measure One dollar a Day, Allen advocated a linear programming approach in which the poor speaks for themselves by revealed consumption baskets.
The keynote was followed by an intensive full day program with six parallel sessions covering topics from a wide range of geographical areas and time periods. The first day was concluded in the early evening of the 4th, leaving the economic historians with some free time to continue the discussions, and for some, giving a chance to see the famous leaning tower.
The second day continued with paper presentations followed by discussions. Before lunch, a special session was designated to the finalists of the Gino Luzzatto Prize for best dissertation relating to any topic in the economic history of Europe defenced during the period July 2013 to June 2015. There were three finalists in the Gino Luzatto Prize competition and each presented their main results to the audience.
First, Ulas Karakoc who received his PhD from the LSE and is currently at Humboldt-Berlin discussed the divergence between Turkey and Egypt in the interwar period. Secondly, Eric Schneider (with a PhD from Nuffield, Oxford and currently at LSE) presented new findings relating to energy costs, health and gender among British families and American school children. The third finalist, Yannay Spitzer (who received his PhD from Northwestern University and is currently at Hebrew University) presented his work about Pogroms, Networks, and Migration, specifically concerning the Jewish Migration from the Russian Empire to the United States in the late 19thand early 20th century. After the presentations the audience took the opportunity to ask several questions about the new findings presented in these recent dissertations. The name of the winner of the prize was however kept secret until the Conference dinner, when it was announced that Yannay Spitzer received the honour. 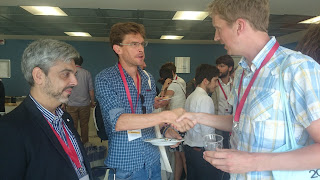 The conference program concluded with the General Assembly for the members of the EHES, chaired by President Giovanni Federico. Treasurer Olivier Accominotti presented that the finances of the EHES are in good health, and the current editorial team of the European Review  of Economic History (Niko Wolf, Joan Rosésand Dan Bogart) explained that the journal has had an impressive amount of submissions lately and that it is consistently climbing in impact rankings, now only surpassed by Journal of Economic History in the field.  The two former editors, Sevket Pamuk and Greg Clark, were heart fully thanked for their services. As the General Assembly closed the conference, the presidency of the society was handed over from Giovanni Federico to Joerg Baten who took the chance to welcome everyone to the next EHES meeting to be held in Tübingen 2017.
The conference dinner took place at the beautiful Closter of Chiesa Di Santa Maria Del Carmine with excellent food and a dessert in the shape of the leaning tower.

This comment has been removed by a blog administrator.