Parallels are often drawn between the Great Recession of the past decade and the economic turmoil of the interwar period. In terms of global trade, these comparisons are based on obsolete and incomplete data. In a new EHES Working paper, we re-estimates world trade since the beginning of the 19th century using a new database. The effect of the Great Recession on trade growth is sizeable but fairly small compared with the joint effect of the two world wars and the Great Depression. However, the effects will become more and more comparable if the current trade stagnation continues.

The long-run consequences of the slowdown of trade growth since 2007 are still under debate (Boz et al.2014, Costantinescu et al. 2015, Hoekman 2015). Pessimists warn that the Great Recession might be a historical watershed, marking the end of decades of booming world trade and globalisation (The Economist2014). It is clearly still too early to tell, but economic historians are drawing parallels with the backlash against globalisation in the 1930s (Eichengreen 2015) – comparing the boom before 2007 to the growth before World War I, relabelled the ‘first globalisation’ (O’Rourke and Williamson 1999, Bordo et al 2003, Collier and Dollar 2002).

These comparisons are based on obsolete and partial series of trade. They do not take into account recent scholarship, do not cover the first half of the 19th century, and neglect less developed countries. Thus, in new work, we have re-estimated world trade starting from a comprehensive database of trade by country (Federico and Tena-Junguito 2016 EHES Working paper). For each polity (independent countries, colonies, and native territories) we estimate imports and exports, at both current and constant (1913) prices and for both current and at constant (1913) borders. Whenever available, we have used modern estimates of trade or national accounts. Otherwise, we have collected data at current prices from original sources, filling the gaps with interpolations or extrapolations based on trends in nearby or similar polities. We have deflated these series with country-specific price indexes, mostly based on London prices, adjusted for freights and we have converted all data into both current or 1913 dollars. The number of series in the database increases progressively from 10 to about 130 – that is, all the existing ones, with very few and quantitatively negligible exceptions – after 1850. We compute world trade after 1850 as a sum of exports of all polities. We extrapolate the 1850 level with indexes of trade for time-invariant samples, which include 10 polities since 1800, 62 polities since 1823 and 89 since 1830, which account respectively for 55%, 80% and 95% of world trade in 1850. Finally, we link our estimate in 1938 to the series of the United Nations (UNStatistical Yearbook) and of the WTO to get a series of world trade from 1800 to present.

Figure 1 plots the resulting series in log scale to highlight long-run trends. From 1800 to 2007, world exports grew at an impressive 4.22% annual rate (significant at the 1% level), corresponding to a cumulated 6437-fold increase.

A combination of visual inspection and statistical testing suggest dividing the series into eight periods, plus the most recent slowdown. Table 1 reports the corresponding yearly rates of change. 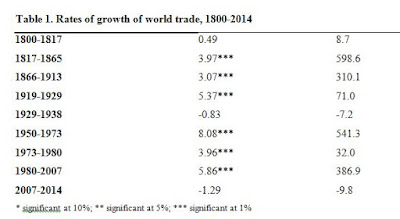