Globalization and The Rise of Mass Education explores how global forces shaped national and regional educational trends. The globalization of the world economy, starting in the 19th century, brought about important changes that affected school policy and long-term human capital accumulation. Large migrations prompted brain drain and gain across countries, alongside rapid transformations in the sectoral composition of the economy and demand for skills. Ideas on education and schooling circulated more easily, bringing about relevant changes in public policy, while the changing political voice of winners and losers from globalization determined the path followed by public choice. Similarly, religion and the spread of missions came to play a crucial role for the rise of schooling globally. The book is the first of its kind to link globalization and education in a historical perspective, and includes contributions focused on Europe, the Americas, Africa and Asia. 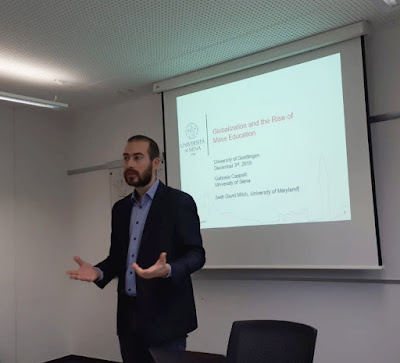 Gabriele Cappelli, one of the editors of the book (with David Mitch), presenting the volume.
The edited volume was presented at the University of Goettingen on December 3rd, 2019, in an event organized by Bruno Witzel de Souza, one of the authors, and sponsored by the Centre for Global Migration Studies and the Courant Centre for Poverty, Equity and Growth in Developing Countries. Gabriele Cappelli, one of the editors, presented the concept of the book, its research agenda and its main results, while Felix Meier zu Selhausen, Irina España Eljaiekand Bruno Witzel de Souza presented their chapters – addressing, respectively, missions, conversion and education in colonial Africa, racial exclusion and school development in Colombia during the First Globalization, and the impact of German schools amid Brazilian coffee plantations (1840 – 1940). 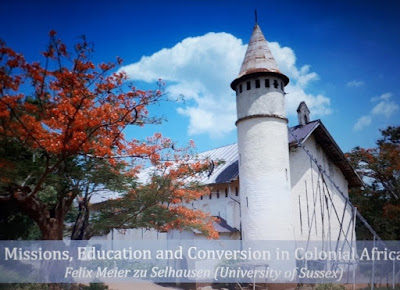 The chapter presented by Felix Meier zu Selhausen.
The audience, coming from different backgrounds (mainly historians of education, economic historians and development economists), was engaged and active in asking questions and providing comments that expand the range of issues addressed by the book. One issue that was discussed is to what extent the history of education is constrained by country-focused analyses and the availability of nationally-produced data, and to which degree we can write a more transnational history of education within the framework of global history and the history of knowledge.
Some issues, like the impact of German-migrant enclaves and German schools in Brazil, raised the interest of development economists, who drew parallels with the current integration of refugees across European countries. The comments, questions and debates that were prompted by the event suggest that the book will be of interest for many scholars interested in the issue of globalization and its educational impact, no matter their backgrounds. 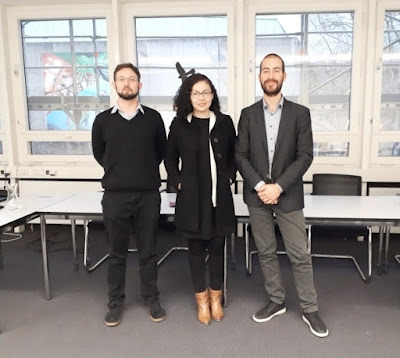 Three of the four authors at the end of the event. Form left to right: Bruno Witzel de Souza, Irina España Eljaiek and Gabriele Cappelli. We thank Felix Meier zu Selhausen for all the pictures — the reason why he does not show up in them.