We provide new estimates of changes in the spatial concentration of U.S. manufacturing from 1880 to 2007.  The average level across all industries fell by more than half over the period.  Creative destruction has had a strong spatial component which eroded the manufacturing belt and when compounded by globalization left a legacy of left-behind voters.  Even so, almost all industries can be described as significantly spatially concentrated at all times.

See the full paper, now on early view at the European Review of Economic History, here

Everybody knows that the geography of industrial production changed dramatically during the 20thcentury both across and within countries.  There was clearly a strong spatial aspect to the forces of creative destruction.  The ‘left-behind’ victims of these geographic trends have become an important constituency in contemporary politics.

It is important to control for differences in the size distribution of plants when measuring spatial concentration and also to take account of the geographical position of regions through allowing for ‘neighbourhood effects’.  The spatially weighted version of the Ellison and Glaeser index has these desirable features and provides a better measure of spatial concentration than traditional indices such as Hoover’s localization coefficient but has not previously been used by economic historians.  In our new paper (Crafts and Klein, forthcoming) we present estimates of this index for manufacturing industries in the United States for selected years between 1880 and 2007.  We find as follows.

First, there was a big decline over the long run in the average spatial concentration index.  This occurred in two phases – gradual prior to 1940 and rapid after 1940.  The mean across all industries was 0.223 in 1880 which fell to 0.183 in 1940 and 0.096 in 1997 (Figure 1).  Greater spatial dispersion was characteristic of the vast majority of manufacturing industries by the second half of the 20thcentury. 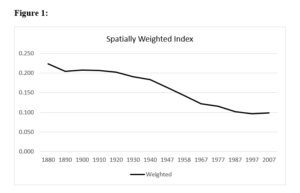 Second, the measured decline in spatial concentration before 1940 confirms the views of economic geographers writing around this time who stressed the de-centralization of economic activity but has been overlooked in more recent literature.

Third, nevertheless almost all industries are spatially concentrated in the sense that the index score is always positive and significantly different from zero.  Indeed, the vast majority of scores throughout the period are above 0.05, the level which is conventionally described as ‘highly concentrated’ and indicative of the existence of significant local cost advantages.  This was still true at the end of the period in 2007 when the mean was 0.098.

Decline of the Manufacturing Belt

The context for long-run changes in the location of manufacturing has strong similarities with the stylized core-periphery model associated with Paul Krugman which places transport costs centre stage.  The model envisages a move from very high to intermediate to very low transport costs driving a move from dispersed to spatially concentrated then back to dispersed locations for manufacturing.  In the spatially concentrated (manufacturing belt) phase the core benefits from economies of scale and proximity to markets and suppliers which raises productivity but also tends to raise wages; subsequently, however, in the context of much lower transport costs, the wage gap becomes too high and moves to the periphery promote a convergence of wage rates.

An excellent example of this process is Motor Vehicles and Equipment (SIC 371) where overall geographic concentration fell in the second half of the 20th century but where significant localization persisted in a new configuration.  The index for SIC 371 was 0.191 in 1940, 0.120 in 1958, 0.106 in 1977 and 0.094 in 1997.  This is reflected in maps 1 to 4 which show an evolving pattern of spatial concentration over time such that by 1997 the move away from the 1940 situation of a dominant position for Michigan and an east-west corridor in the southern Great Lakes region has been superseded by one in which Michigan is still a major centre but clusters within ‘Auto Alley’ extend as far south as Alabama.

Clearly, industrial geography changed greatly during the 20th century.  Spatial adjustment can be seen as an integral part of the creative destruction which was instrumental in promoting this change.  The relative decline of traditional manufacturing areas was driven by domestic cost factors and not simply attributable to globalization.

It might be argued that with a relatively flexible economy and mobile society the United States has coped with these pressures quite well.  Even so, some workers have been left behind and addressing their grievances has become a big political issue.  While cities like Boston have regenerated with knowledge-intensive business services and a highly educated workforce others such as Detroit have not been so well-placed.  Of the six states which were red in 2016 but had been blue in 2012, four (Michigan, Pennsylvania, Ohio and Wisconsin) were in the manufacturing belt – their electoral college votes won it for Trump. 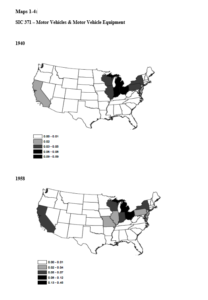 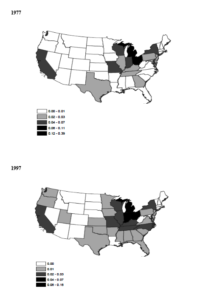