Can a country with a free-trade policy also pursue a preferential trade policy? In the 1920s, Britain tried. Britain’s Empire Marketing Board (EMB) was created in 1926 to extend a non-tariff preference to imports from the empire by means a widespread publicity campaign. As we find, the EMB’s campaign failed, and we offer several explanations why.

Between 1926 and 1933, the Empire Marketing Board (EMB) sought to influence the purchasing habits of British consumers.  This initiative was ambitious because British consumers had long been accustomed to purchasing produce from non-empire sources, for example, Argentine beef, Chinese tea, as well as Danish butter and Dutch cheese.  The campaign was also unprecedented: public money was expended on a marketing campaign intended to provide a ‘soft’ trade barrier to favour empire producers.

As an instrument of trade policy during the interwar period, the EMB appears unusual in the economic history literature which has been dominated by analyses of ‘hard’ policies involving tariffs.  The creation of the EMB was an attempt by the British government to reciprocate the formal tariff preferences that the Dominions extended to British exports.  The establishment of the EMB was necessary preciselybecause Britain maintained an essentially free trade policy until 1932.  Indeed, prior to that date, tariff reform, which sought to abolish Britain’s commitment to free trade, was responsible for the Conservative government losing its overall majority in the General Election of 1923.

Evaluating the effectiveness of the EMB

The fundamental objective of the EMB was to ensure that the British empire accounted for a growing proportion of Britain’s produce imports.  Consequently, the Board pursued three major policies: it financed research into the problems affecting empire food production; provided market intelligence to British trade organisations; and launched a major, national, publicity campaign involving ‘empire shopping weeks’ and the commissioning and distribution of iconic posters which appeared on billboards in major cities and towns.  Each policy was interrelated. For example, improvements in the quality and regularity of the supply of empire produce would help make the Board’s publicity more effective (Figure 1). 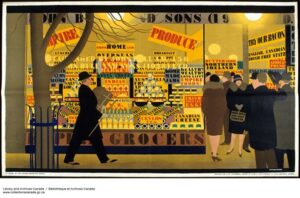 In our study we assess the impact of the EMB’s publicity campaign on Britain’s empire imports.  Posters were a key component of the EMB’s total publicity, accounting, on average, for 35 per cent of the Board’s total publicity expenditure between 1926 and 1932.  We selected posters issued in 1927 that advertised a particular commodity and Dominion, for example, Australian frozen beef.  Our total sample includes advertised and non-advertised commodities originating from other parts of the empire and from non-empire countries.

The econometric results indicate that the EMB’s poster campaign did not affect the empire’s share of British imports for any of the advertised commodities in our sample: Australian frozen beef, Canadian grain, Ceylon tea, Indian rice, Mauritian sugar, New Zealand butter, and New Zealand cheese.  We advance three explanations for the failure of the EMB.

First, our re-examination of the EMB’s publicity expenditure indicates that it was small when compared with the advertising expenditures of the official Dominion organisations responsible for exports — the Australian Dairy Produce Control Board, the New Zealand Dairy Produce Control Board, and the New Zealand Meat Producers Board.  On a standardised basis, the publicity expenditure of the EMB was considerably smaller than that of the Control Boards.  Moreover, the EMB’s expenditure was much less focused: not only did the EMB advertise a diverse range of empire produce, from Cyprus brandy to Malayan pineapples, but much of its advertising did not indicate an association between a Dominion and a commodity or, indeed, feature either a specific Dominion or commodity at all.

Second, it is remarkable that so much effort was devoted to persuading consumers to ‘buy Empire’, when many empire commodities were retailed without an indication of geographical origin.  Landmark legislation was introduced by the Merchandise Marks Act, 1926.  This Act stipulated that producers could make an application for a Marking Order to ensure that specific foodstuffs indicated country of origin.  However, this Act was never applied to cheese, grain, rice, or sugar.  Attempts were made to secure the marking of tea, but this was vociferously rejected by tea distributors and retailers, and famous British tea-blending companies for whom company brands were incomparable marketing assets.  A Marking Order for butter was secured in 1931, but even this Order left considerable leeway to grocers on the precise indications of origin they applied to pats of butter.

Beef (including frozen beef) was subject to a Marking Order from 1933, but by then there had been a pronounced change in the preferences of British consumers toward chilled beef, which was largely supplied by Argentina and the River Plate.  In fact, technological factors meant it was not possible for Australia to supply chilled beef to Britain during the interwar period. By the late 1920s, British consumers’ views of frozen beef were so disapproving that sales of this  commodity were restricted to asylums, other public institutions, and the British army!

The key conclusion to emerge from our study is that soft policies were not an effective substitute for tariffs and other types of quantitative trade restrictions. The introduction of hard barriers to trade had to await changes in the political and economic environment which occurred in the early 1930s.

This comment has been removed by a blog administrator.

I would strongly love to recommend the services of the best team of dark web hackers. They are professional and very discreet in carrying out their jobs, they have the best customer service agents and satisfaction at heart. If you have any services you wish to contact them for, go on contact@wizardcharlesgrouphackers.com or wizardcharlesgrouphackers@gmail.com, WhatsApp +31 6 84990027, They help track and monitor your cheating partner's phone without his idea, clear or erase criminal records as well as repair a bad credit score, all social media hacks, Recovery lost Funds from scammers / Cryptocurrency / Binary / Forex / Recovery of Stolen Bitcoin and many others. website : https://wizardcharlesgrouphackers.com/.n/