Historians interested in the study of economic performance of preindustrial societies owe a major intellectual debt to Angus Maddison. Even if by means of somewhat speculative methods, Maddison (2001) produced the first comprehensive set of estimates of GDP per capita for a large group of countries which resulted in an intriguing account of the dynamics of economic growth since the end of the Middle Ages (Maddison 2007).

This preliminary global quantitative assessment has prompted historians to later embark in more refined statistical reconstructions of the long-term evolution of output per capita and to develop new ways to integrate these different country-specific estimates over time and across space (Bolt and Van Zanden 2014, Bolt and Van Zanden 2020).

Notwithstanding the riches of source materials dealing with prices and wages, France has been left at the margins of the ongoing efforts of reconstruction of these “second generation” estimates of GDP per capita.

In this paper, we tackle this issue, by providing new estimates of output per capita for France over the period 1280–1850 using the demand-side approach.

The French case is interesting for two main reasons.

The first reason is that an important historiographical tradition, made popular by the French historian Emmanuel Le Roy Ladurie with a famous article first appeared in the Annalesin 1974 (see picture below), has depicted France as a paradigmatic case of an inherently stagnant economy dominated by Malthusian checks and other institutional and cultural constraints. Hence, in this perspective, the French case may perhaps provide new materials for assessing the overall plausibility of the Malthusian model as a suitable empirical characterization of the long run evolution of living standards in Europe before the Industrial Revolution.

The second reason relates to the very origins of modern economic growth in pre-industrial Europe and, more specifically, to the analysis of the so-called “Little Divergence”, the process whereby the North Sea Area became the most prosperous and dynamic part of the continent.

Much discussion surrounds the timing and causes of why, between the Middle Ages and the modern period, the frontier of Europe’s economic development moved from the Mediterranean space and particularly Italy -which so far had been the world economic leader- to the countries of the North Sea region (Allen 2001, Broadberry 2020, De Pleijt and Van Zanden 2016). Despite that, there is still a general lack of consensus on the evolution of living standards and the main determinants of this process. In this context, a fresh assessment of French economic performance, a neighbouring country with multiple political, economic, and military interactions with the North Sea area could contribute to shed new light on the drivers of this initial phase of modern economic growth. 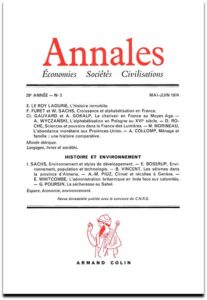 Our analysis highlights three main results (see Figure 6 of the article, reproduced below).

First, French output per capita fluctuated with no trend over the long term, with perhaps the exception of a modest “efflorescence” of economic growth during the seventeenth century. Until the seventeenth century, this pattern of growth chimes with Le Roy Ladurie’s (1974, p.688) notion of “motionless history” according to which ‘malgré immenses changements parmi les superstructures celui-ci tel en lui-même se retrouve finalement très proche la veille des famines de la Fronde et de celles de 1693 ou de 1709 de ce il était trois siècles et demi ou quatre siècles auparavant la veille de la famine de 1315 (despite the immense changes of the superstructures, the system finally finds itself very close, on the eve of the famines of the Fronde and those of 1693 or 1709, to what it was three and a half or four centuries before the eve of the famine of 1315).’

In this respect, Italy, the Netherlands and England appear as the main exceptions to this broad European pattern of relative stagnation.

The second result speaks more closely to the debate about the level of comparative development of England and France over the long run which a long historiographic tradition has seen as a useful vantage point for studying the origins of the Industrial Revolution (Crouzet 1985).

Our new series of GDP per capita challenges the notion of an early modern “Little Divergence” between England and France (Allen 2001) and points instead to a later divergence taking place by about the second half of the seventeenth century.

Finally, in our reappraisal of French economic performance, the French growth experience appears to be as an ‘intermediate case’ between the sustained growth pattern of the North Sea region countries and the stagnating or declining trend of the rest of Europe. 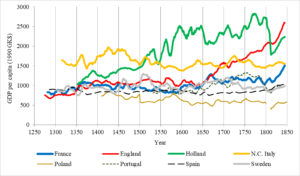 Allen, R. C. (2001). The great divergence in European wages and prices from the Middle Ages to the First World War. Explorations in Economic History38, pp. 411–447.

Maddison, A. (2001), The World Economy: a Millennial Perspective. Paris: OECD.