By Marina Chuchko, Department of Economic and Social History, The University of Vienna

and more about Marina’s research here

In my new article, I study the accuracy of Russian foreign trade statistics and reconstruct the trade series for the period of Russia’s rapid industrialization between 1880 and 1913. The importance of the foreign trade data for our understanding of a country’s participation in international trade, their economic specialization, and even their level of industrial and economic development makes it crucial to ensure the accuracy of the available records. Even though scholars continuously express doubt about the validity and reliability of Russian foreign trade statistics, a systematic, empirical re-evaluation of the country’s official trade records has not been yet undertaken.

To estimate the accuracy of Russian official export and import records, I first match Russian aggregate trade flows with the trade figures of Russia’s major trading partners. I construct the first series of freight and insurance costs for Russian exports between 1880 and 1912 to account for differences in registered prices in the Russian official trade records and the records of its partners. Then I calculate a Price Accuracy Index for imports and exports to identify whether a mismatch of the partners’ records result from problems in price assignment.

I establish a high degree of accuracy in the export data during the entire period of observations, 1880–1913. Import figures, on the other hand, were systematically overvalued in the 1880s and 1890s. This only changed when a new system of unit-value assignment based on computed prices was introduced in 1898. My new estimates of the trade balance show an average increase in trade surplus for the years 1881–97 by 26 percent (186 versus 148 million rubles). 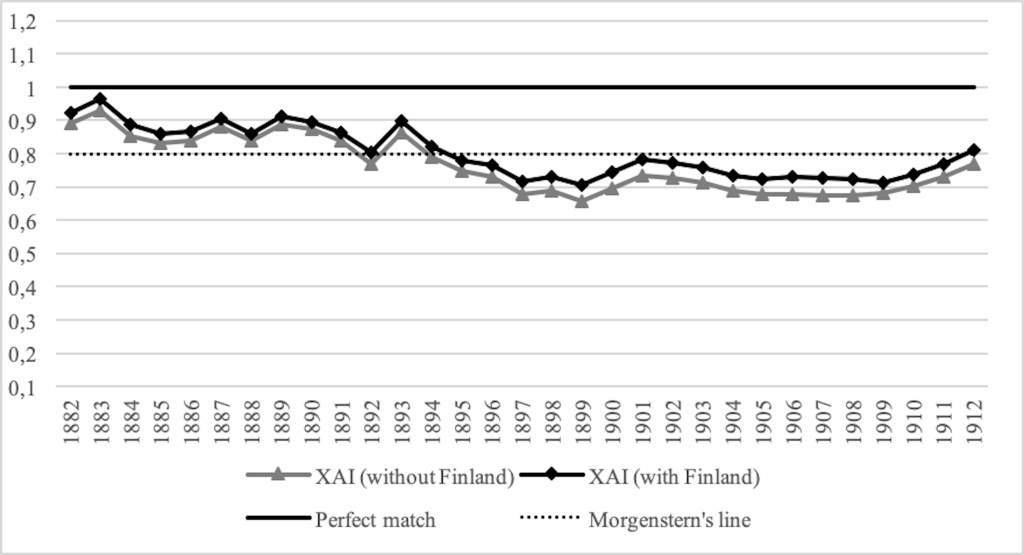 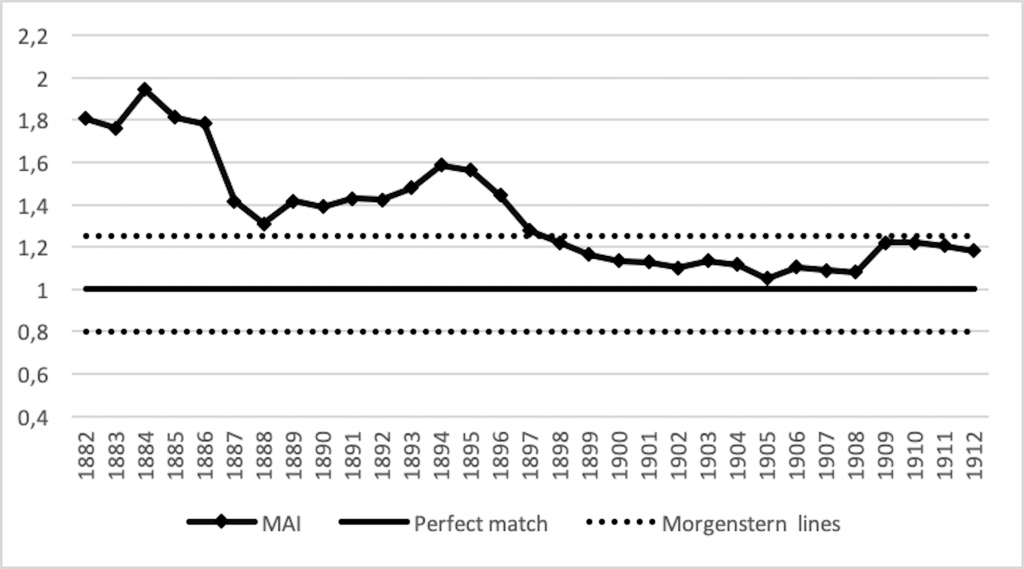 This paper contributes to several lines of research. Firstly, it broadens the general understanding and knowledge of the scope and dynamics of Russian foreign trade during the country’s industrialization. Secondly, it provides new insights on the level of protectionism in the Russian Empire in the first period of globalization. My novel import series suggests that in the 1880s and 1890s Russian trade policy was even more protectionist than previously assumed. The average ad valorem equivalent import tariff for the years 1880–1885 increased from 17.9 to 20.6 percent while for some years such an increase reached 4 percentage points.

Finally, this article shows the implications of trade balance reconstruction for net foreign investment estimates in the late Russian Empire. Because balance of trade is one of the components of the current account balance, it shows the amount and dynamics of net foreign investments. I find that the adjustment of the previously overvalued import series reduces the annual average current account deficit for the years 1885–97 by 67 percent, from 43 to 14 million rubles. I compare the average annual net foreign investments for pre-gold standard period (1885–97) and post-gold standard period (1898–1913) and see that the net inflow of foreign investments was 13.4 times higher in the second period. These address the debate on the effect that adherence to fixed parities and convertibility of national currencies have for access to foreign capital markets.

Moreover, foreign capital inflows are often considered a crucial factor contributing to economic growth; however, the existence and the importance of such an association remains a subject of debate among scholars. The Russian Empire is an important case study on this topic considering that by the end of the long nineteenth century it was the largest recipient of capital in Europe.

[i] The exports and imports are converted into current pounds sterling, using the exchange rates from Denzel (2010). Prior to the calculations of the Export Accuracy Index, I made the necessary adjustment for Finland by adding the amounts of Finnish exports to the selected countries to the respective Russian export values, and transferred export f.o.b. values into c.i.f. values.