What is the impact of globalization on the Welfare State? This issue is present in current political debates in many countries around the world. Not surprisingly, it has received a growing attention in academia. However, there is no consensus yet among scholars on what the impact of globalization actually is. Some theories predict a race to the bottom (that is, a negative effect), as international capital mobility may lower taxation and, therefore, social spending (Mishra 1999).  However, other theories predict a positive effect, as globalization-associated risks may lead to growing demands for social protection (Rodrik 1998). If we look at history, we also find examples pointing in opposite directions. In some countries, such as Belgium or Denmark, social policy began to develop in high trade openness contexts; while in other countries, such as Germany or France, it seems that social policy expanded hand-in-hand with trade protectionism.

What can explain this apparent paradox? This paper contributes to this debate by analyzing the impact of trade openness on social spending in Spain between 1850 and 2000. Spain is an interesting case for at least two reasons. First, Spanish trade openness experienced major changes between 1850 and 2000 (combining periods of low trade exposure with periods of high trade openness). Second, Spain shows the same puzzle that we observe in international studies. That is, in some time-periods (basically in the last decades of the 20th century), Spanish social spending increased along with trade openness. However, at other times (most notably in the earlier decades of the 20th century), Spanish social spending increased (slowly) in a context of increasing trade protectionism.

To test this hypothesis, I have analyzed the relationship between trade openness and social spending in Spain between 1850 and 2000. The results of the econometric analysis are illustrated in figure 1, and seem to confirm this idea. As can be seen, fiscal capacity does not seem correlated to trade openness. This means that, as expected, trade globalization does not automatically lead to a race to the bottom or lower taxation. The dots situated in the upper right corner indicate that, in certain periods, Spain managed to have high fiscal capacity along with high trade openness. The interesting point here is that, above the horizontal lines fiscal capacity is high enough and trade openness effect on social spending is positive. In other words, above the horizontal lines Rodrik’s compensation effect prevails over the race-to-the-bottom effect. According to my regressions, this happened in Spain between 1959-62 and 1992-1998. However, below the horizontal lines the race-to-the-bottom hypothesis prevails, meaning that the government did not have enough fiscal capacity to compensate the population for globalization costs. Thus, trade openness and social spending were negatively correlated. This seems to have been the case before the Spanish Civil War and the early decades of the Franco dictatorship. 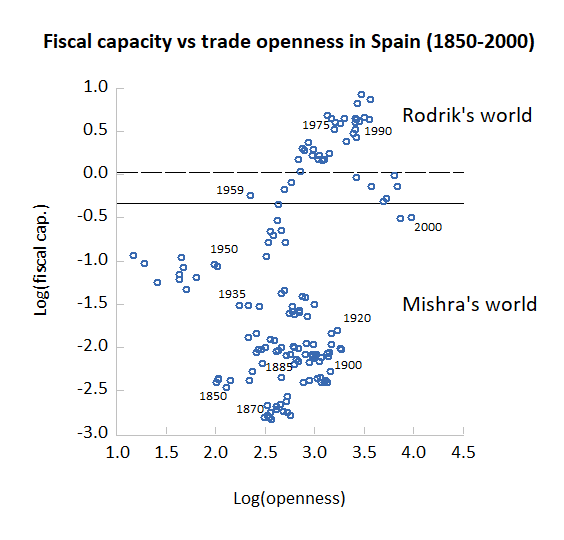 It is worth noting that the interaction between trade openness and fiscal capacity also affected the way in which social policy was financed. Before the 1960s, when fiscal capacity was low, the Spanish government resorted to contributory social insurance programs (financed from compulsory contributions from employers and employees) to overcome the inability/unwillingness of the government to increase taxation. This strategy was taken to an extreme during the Franco dictatorship, when social spending became almost exclusively funded from compulsory contributions, and the customary employers’ opposition to social insurance was appeased by intense labor repression and high trade protectionism. By contrast, after the 1960s, and especially after the arrival of democracy in 1977, the government was able to increase taxation and to adopt a tax-mix more compatible with international trade. Income tax and value added tax were introduced in 1978 and 1986, respectively; so that the share of compulsory social contributions over total government revenue declined. This, in turn, allowed social spending to expand in a high trade openness context without increasing labor costs.

Surely, there are many mechanisms explaining cross-country differences in the relationship between trade openness and social spending. Democracy is probably one of them, as non-democratic regimes can impose free trade without compensating the population for globalization costs (Adserà and Boix 2002). However, this paper shows that considering the role of fiscal capacity is also crucial to explain the (changing) relationship between trade openness and social spending over time (and across countries).